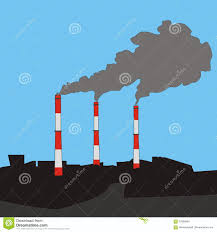 A flue gas stack, also known as a smoke stack, chimney stack or simply as a stack, is a type of industrial chimney, a vertical pipe or similar structure through which exhaust gases called flue gases are dispersed into the atmosphere. Flue gases are produced when non renewable energy sources are combusted in an industrial furnace, a power plant's steam-generating boiler, or other large combustion devices. Flue gas is usually composed of mixture of gases like carbon dioxide (CO2) and water vapor as well as nitrogen and unburnt residual oxygen from the combustion process. It also contains a small percentage of pollutants such as particulate matter, carbon monoxide, nitrogen oxides and sulfur oxides. The flue gas stacks are often quite tall, up to 400 metres (1300 feet) or more, so as to disperse the exhaust pollutants over a greater area and thereby reduce the concentration of the pollutants to the levels required by governmental environmental policy and environmental regulation.

When the flue gases are exhausted from stoves, ovens, fireplaces, or other small sources within residential abodes, restaurants, hotels, or other public buildings and small commercial enterprises, their flue gas stacks are referred to as chimneys. DASH PROJECTS  specializes in the manufacture of customised stacks/ chimneys tu suit customer requirements. We also undertake turn key packages for boiler installations which include Diesel Stroage Tanks, Feed Water tanks, Condensate tanks and stacks.